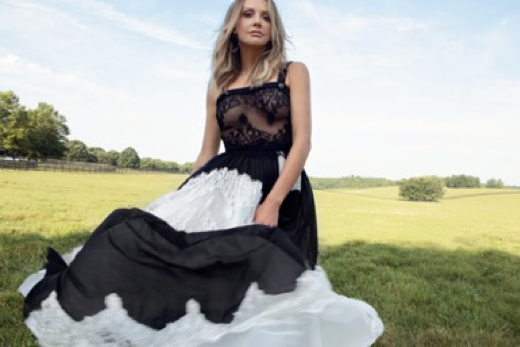 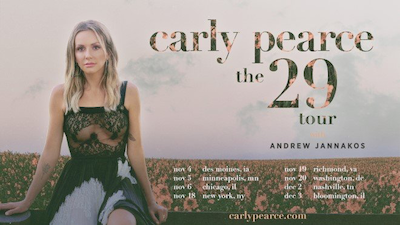 NASHVILLE, TN (September 17, 2021) – Encouraged through personal growth and support as fans found their own truth in hers, CARLY PEARCE expands on the critically-acclaimed original collection, today releasing 29: WRITTEN IN STONE via Big Machine Records. The chart-topping songwriter uses her powerful voice to share 15 tracks of life experiences and announces her first headline run this fall with THE 29 TOUR. Carly invites fans to celebrate with her tonight during a special 29 Questions in 29 Minutes livestream on YouTube at 6:00P CT.

Carly began the week in Los Angeles performing “Next Girl” on Jimmy Kimmel Live!, appearing on E!’s Daily Pop and joining Rolling Stone writer Samantha Hissong at the GRAMMY Museum® for an intimate discussion with  about the making of 29: WRITTEN IN STONE. Tomorrow (9/18) a portion of the content and performance will also be available as part of their public programs digital series Spotlight Saturdays.

Since her breakout debut with “Every Little Thing,” the Grand Ole Opry member from Taylor Mill, Kentucky who left home at 16 for a job at Dollywood has remained fiercely rooted in classic Country honesty and instrumentation. Carly earned her first CMA Awards nominations for both Female Vocalist and Album of the Year with 29, where she is the only woman in the category.

The theater dates will focus on the music from 29, plus PLATINUM breakout “Every Little Thing” as well as 2X PLATINUM CMA and ACM Awards Musical/Music Event and ACM Single of the Year “I Hope You’re Happy Now.” Fan club pre-sale begins September 21 with public on-sale September 24, both at 10A local time via CarlyPearce.com.

THE 29 TOUR DATES with Andrew Jannakos:

Carly has grown into a woman who embraces the genre’s forward progression and is confident in what she wants to say. Whether facing the loss of her longtime champion and producer busbee, the end of her marriage or finding the parallels in her journey with those before, she embraces music as the greatest form of resilience. Carly wrote “Dear Miss Loretta,” a duet with fellow Kentucky icon Patty Loveless, to express a true understanding versus a deep appreciation for Lynn’s pain and life. She doubles down on real Country with the double-crossed scorn of Ashley McBryde collaboration – and new single – “Never Wanted To Be That Girl.” Carly not only dissects the human heart through song, but also considers the healing that comes with time.